Ethiopia's Foreign Relations Then and Now!

The following is an invaluable piece of document in which we find an extremely riveting story. It is a story not just interesting and entertaining to read, like some kind of fiction. Rather, it is a story as strongly inspiring as it is really real! For precisely which reason, however, it is a kind of story that “developmental” historians and researchers of all sorts, who have put themselves to the service of the Zeitgeist, would not want us to hear about. In fact this kind of story does not sit well with those who have a “grand plan” of fragmenting a great nation. But I believe it indeed is ennobling for us Ethiopians to know about it, even when we have fallen, alas, on such awfully hard times!

I do not remember how I first came across this document, but I recall that exactly ten years ago, when I heard about Egyptian monks beating up their Ethiopian counterparts over a dispute about Deir Sultan Monastery in Jerusalem, I copied it on my computer and shared the story to an online group of Oriental Orthodox Church scholars. For a significant part of that group were the Copts.

Honestly, tears flowed down my cheeks when I first copied it and they are now swelled up in my eyes as I bring it again to the attention of my fellow Ethiopians. How could I stop? How can I control? My tears, when I compare the height of our glory exemplified by the events recounted in the story with the depth of humiliation we have been witnessing at this juncture of time?

In any case, here you have a document that clearly shows how Ethiopia’s foreign relation of mid-Second Millennium looked like: 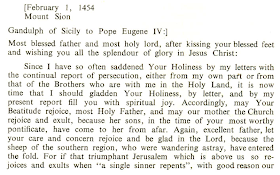 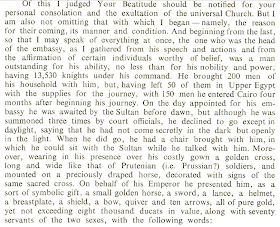 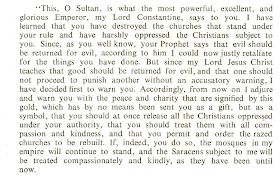 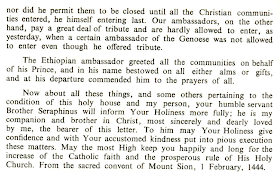 Having read the above, take a moment now to examine closely the manner in which "Ethiopia's" ministers of our time are behaving. No need of too much research though, just look at this self-explanatory picture: 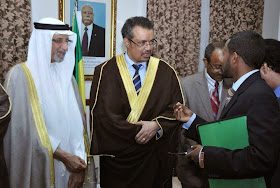 Then hold it up under comparison with the way in which the then Ethiopian Ambassador acted. Particularly with this incident:

When the ambassador had finished… the Sultan promised that he would fully answer him after a few days. He also ordered that a very costly cloak be brought at once, so that he could straightway wear it according to his custom and could depart from the presence of the ruler glorified. This he refused to do, saying that in no way could he wear or carry it over the cross, and so he gave it at once to his interpreter to wear. After his departure from the Sultan’s presence a general proclamation was made that all Christians should be well and kindly treated by the Saracens, just as they used to be treated before, and that no one should dare to persecute or molest them.

Similarly, let us look at this particular video clip and think of hundreds of similar ones, especially the recent horrific pictures coming from Saudi.

And then let us go back and read the following paragraph (and those that follow) again:

Now please be serious for heaven’s sake and compare the generations—ours with that of the mid-Second Millennium’s—and judge for yourselves!

And yet here is what some shameful “developmental” orators had to preach:

In fact all these preachers did not think anything essential for themselves at all, they just seem to have echoed the essentially hateful sermon of their Archapostle who had been playing a kind of “neo-retro game” in which he clearly showed, for one last time, his intention to multiply our nation's Millennia old glorious history by zero!

Question is: Shall we continue to let them play such a dirty game? When shall we wake up, if not now?